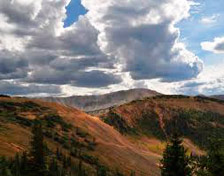 How to get there:

Cumberland Pass is one of Colorado’s most scenic and historic passes. The road is passable by most passenger vehicles and is open to ATV’s.

town hall There are approximately 95 graves in the Tin Cup Cemetery. The first burial was T. L. Stormes on April 30, 1879. Tincup, which changed its name from Virginia City in 1882, is a small community featuring many summer residences and beautifully restored structures that hint at its colorful past.

Spectacular vistas of the Continental Divide. There is also a great deal of mining remnants in the area, such as the Bon Ton Mine.

This charming mountain town has around 80 full-time residents, and the population swells to 300 in the summer months. The city hall and the hotel are remnants of the past.

Located 17 miles east of Pitkin on FR 839. The first tunnel ever constructed through the North American Continental Divide. Next to spectacular cliffs, the road crosses a narrow man- made terrace known as the “Palisades”. The ledge is supported by a wall of hand cut native stones, two feet thick by 33 feet high and 425 feet long. The entire wall was dry laid without the use of mortar. A tribute to its talented builders, the wall remains today in the same relative condition as when first constructed in 1881.

When you reach the tunnel complex, you’ll see remnants of the massive engine house and the section house; crumbling ruins located across from the restored telegraph office. The telegraph office, constructed in 1883, remains as the centerpiece of the tunnel complex restoration efforts. Ongoing volunteer help has reconstructed the station platform and relaid 120 feet of original Denver and South Park rails.

At Your Own Risk

Seasonal, weather, road conditions, vehicles and driver's skills will vary—travel is at your own risk.

With some exceptions, these locations can be reached with a normal two wheel drive vehicle. High clearance four wheel drive is advised for most off the highway locations and low range gearing is required for a few and is so noted.

Please tread lightly and travel only on routes and in areas designated open for motor vehicle use.